Republican states seemed to have gained some ground since the 2016 presidential election when considering the percentage improvement in broadband download speeds. However, Republican efforts in the Red vs. Blue broadband battle may be for naught as the Democrats stand to take any glimmer of (Republican) hope in the top 15 states with the fastest broadband speeds.

The Impact of Cellular and Broadband Speeds

While 2016 was a regular Red vs. Blue state contest with a few tossups, competition in the 2020 election is fiercer. Several key Republican states hang in the balance as the Democrats seemingly target the top Republican states (in terms of internet speeds). Republican and Democrat states have seen a similar trend in the percentage improvement in broadband speeds since the 2016 presidential election.

Republicans about to fall out of TOP 15 states with highest broadband speeds.

The real showdown, however, is taking place in the top 15 states with the fastest broadband speeds – where the Democrats have held onto the blue majority.

And, much like how the Los Angeles Lakers dominated the Miami Heat in the 2020 NBA Finals, the Democrats have decided to up the ante with a strong offense by going after the “Big Three” of Republican states (the only three Republican states in the top 15).

Internet speed will be very much a part of the relentless Red vs. Blue battle in this election. Cellular and broadband speeds not only vary across income brackets and from state to state; they also show trends from party to party in the election cycle. Trends that, when viewed in relation to the data, may give one party an advantage over the other when all is said and done. Let’s take a deep dive into the data and statistics to understand who the winners and losers may be in November in terms of the internet speeds we have collected – via user speed test data – for 2020.

Of the top 15 states in 2020, ranked by mobile internet speed, 12 are either safe Democrat or strongly lean Democrat. Coming in at the top is the District of Columbia with cellular speeds at 25.66 Mbps down to a low range of 16.25 Mbps in Connecticut. Only Utah and Florida are considered Republican, although Politico reports that even Florida may be a potential tossup in this cycle as Democrats have made substantial progress there.

The broadband numbers represent changes reflected in states across the nation. Many have prioritized broadband as an essential service to drive business, healthcare, and education. Because of this, access to information is faster and more readily available, a possible factor in the potential shift to the blue column in Democrat vs. Republican contests.

In terms of infrastructure, both Florida and North Carolina have pending bills in front of their legislatures to expand broadband into underuse or multi-use areas. However, North Carolina’s legislative initiatives are much more aggressive and expansive regarding infrastructure and expands broadband build-out initiatives into education and through public-private partnerships.

The trend toward broadband infrastructure build-out and expanded cellular coverage can be seen in the chart above, which shows a marked increase in speeds in 2020 compared to the same period in 2016. Only one state, Mississippi, showed a net negative cellular growth between 2016 and 2020. And except for Georgia and Oregon, who grew cellular by 6% over that period, all other states grew coverage in double digits from 15% growth in Wisconsin to an astounding 235% growth in Utah.

The speed increase in broadband was even more substantial, with no state registering a net negative growth rate in broadband speeds from 2016 to 2020. Even the state with the lowest growth, South Dakota, grew at 38% with upper ranges of 171% in Florida and 200% in the District of Columbia. Similarly, the four states considered as tossups for 2020 – FL, AZ, NC, and WI – boasted their improvements in broadband coverage (in percentage) during this period, which was higher than 15 of the 23 safe Republican states.

The implications of broadband speed changes for the election cycle are huge. Democrats had already experienced better success by comparison to Republican victories in pre-2016 elections. And in 2016, Democrats won 12 of the top 15 states with the highest broadband speeds. In 2020, with Pennsylvania expected to vote Democrat and Florida and North Carolina listed as tossups, there is a real possibility that Democrats could win all states in the top 15 - where a blue tendency on the right side of the spectrum in the chart below is indicative of such an outcome.

For east/west geography in broadband speeds for 2020, the states of California and Nevada are the only two western states in the top 15, with speeds of 47.01 and 42.48, respectively. This geographic distribution follows through the percentage change for western states and eastern states, again showing higher rates of increase and perhaps signaling that they continue to pull ahead of their western counterparts.

While the best states for both Democrats and Republicans are in the east, landlocked states and western states remain challenged in keeping up. This may owe itself to the state’s size and the expense of covering less densely populated cities and towns in states with a lot of land. It is also interesting to note the per capita disparity as well, leading one to the question of whether further shifts to the left and to the Democrats may be accomplished through the inclusion of these western and landlocked states in improved infrastructure initiatives.

Cellular speed disparities are extensive across the states. This impacts access to data and response to political information related to election issues. The five top regions are the District of Columbia at 25.66 Mbps, followed by Massachusetts (24.13), Rhode Island (23.48), New Jersey (22.8), and Pennsylvania (19.76). All but Pennsylvania are considered safe Democrat seats, with Pennsylvania being listed as a tossup.

The lower tier states, in terms of the slowest cellular speeds, consists of Vermont with a mere 4.91 Mbps, followed by Mississippi (6.24), New Mexico (6.59), Wyoming (6.64), and Alaska (7.88). The disparity is so stark that the sum of the cellular speeds of the top 3 states is more than double the sum of the bottom 5 states’ speeds.

While 12 of the top 15 states with the highest broadband speeds are mostly favorable to Democrats, there is a strong chance the 2020 election will see that shift to all Democrat states. However, in the bottom 15, while 12 are solid Republican, there is little chance to flip the three remaining states that favor Democrat candidates, signaling a net gain for Democrats. The four tossup states are roughly in the middle of the pack speed wise. However, all have pending bills before their legislatures for additional expenditure on infrastructure. 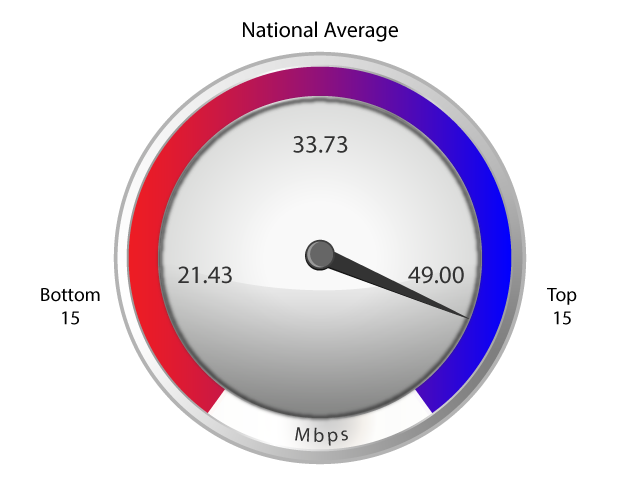 Compared to the 2016 election, the 2020 cycle could see Republicans losing every state that currently boasts the highest broadband speed in the top 15. This has larger implications, as many states are placing a premium on broadband access and coverage to manage healthcare, business, and educational objectives at the state level. While the Republicans held 8 of the top 15 states with the fastest cellular speeds and 4 of the top 15 for broadband in 2016, the potential shift in 2020 exposes a potentially distinct difference in political and legislative priorities and goals in communication technology.

The 2020 election could also impact how priorities are set at the state level to improve infrastructure and speed further. While Florida is a trifecta state, both North Carolina and Pennsylvania are split states. A solid swing for all three to the blue column could see further changes downstream in off-year and midterm elections altering state-level legislative control and perhaps opening opportunities for fresh initiatives for increased cellular and broadband growth.

43 states passed some legislation related to broadband in 2020

In all, 43 states passed some legislation related to broadband in 2020. And most now consider broadband to be critical infrastructure. Because of this, the push to continue expanding coverage and increasing speed isn’t considered a partisan issue. However, while not regarded as partisan, the mix of split legislatures and executive vs. legislative splits could have a political impact on what is appropriated and how that appropriation is spent.

Regardless of the emphasis on broadband infrastructure, there remain many states focused on tax reduction and spending control. These are often also states with lower per capita incomes, which play a role, albeit indirectly, in national elections in terms of public perception. If some of those states begin a stronger push for the growth of cellular and broadband speeds, the benefits in access to higher education online, medical and quality of life improvements, and other benefits could begin to swing the state political alignment in future elections as speeds increase.

Per capita issues may also play a role in the velocity of speed growth and national politics due to a lower base of taxable citizens. In addition to higher per capita incomes, many of the states with the fastest speeds also have higher population densities. The more significant number of taxable citizens means that growth could accelerate for those in the upper-speed range, increasing the already widening gap between the high end and low end of the speed spectrum.

Policy to embrace solid infrastructure growth and continued trajectory of speeds will likely dominate the next election cycle as well, further widening the gap between Red vs. Blue. Whether Republicans hang onto economic or geographic differences as reasons for the slaughter in the Broadband Wars, the top 15 states could adopt “Blue” as their theme song after the 2020 presidential election. All that remains is to see whether the Republicans make a rebound with a new coach the next time there’s a Red vs. Blue showdown.