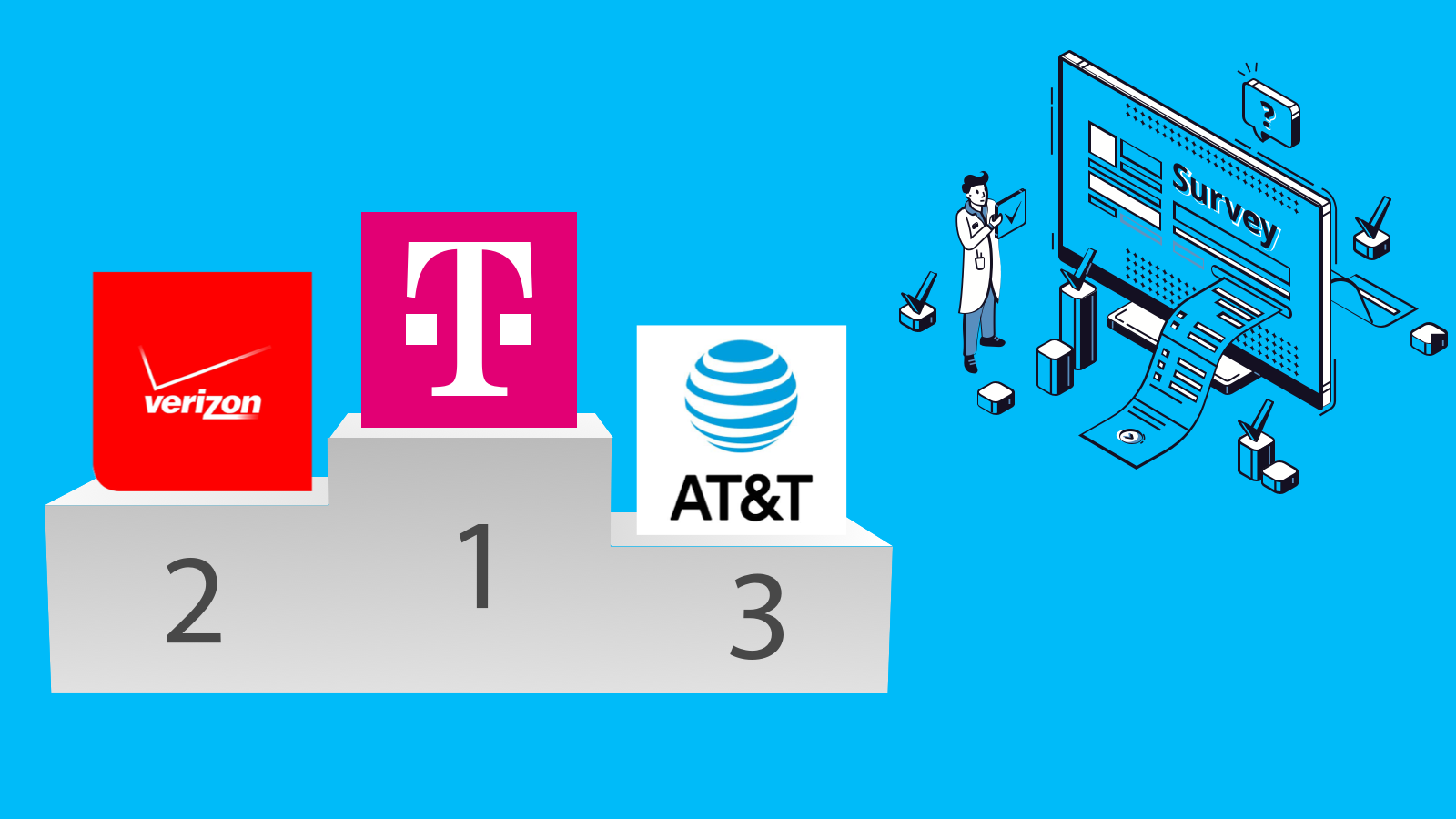 U.S. cellular customers who have adopted 5G are more satisfied with their service than non-5G adopters (3G/4G only), according to a recent survey carried out by Speedcheck. The survey also places T-Mobile ahead of the competition for customer satisfaction, taking the crown from both AT&T and Verizon.

However, when we drill down to the service provider level, the results become even more interesting.

It is also worth noting that T-Mobile’s 3G/4G customers satisfaction is just a nose ahead of AT&T by a margin of some 2% and ahead of Verizon’s 3G/4G by about 6%. This is significant because AT&T and Verizon were historically the trailblazers in 3G/4G performance before T-Mobile found its feet in the marketplace.

Again, when it comes to the overall 5G experience, T-Mobile is well ahead of AT&T and Verizon.

As for 5G data speed, T-Mobile customers are again well ahead of the competition with 62.1% being satisfied contrasted with AT&T’s 51.7% and Verizon’s 50.6%.

Why has T-Mobile Outstripped the Competition in 5G Customer Satisfaction?

It should come as no surprise that T-Mobile wins out over the competition because of its superior speed and coverage. It boasts of having “America’s largest, fastest, and most reliable 5G network”.

Results from tests performed by Speedcheck's service users in the U.S. places T-Mobile ahead of both AT&T and Verizon for 5G speed (both download and upload). It also has the fastest 3G and 4G networks.

Speeds indicated in the chart are median values. T-Mobile’s 5G download speed is 24% faster than Verizon’s and 42% faster than AT&Ts.

The reason for T-Mobile’s leading edge is that it gave itself a two-year head start in developing a fast 5G network following its astute merger with Sprint. That business transaction came with the pearl of Sprint’s 2.5 GHz 5G carrier frequency included. 2.5 GHz is one of the so-called “Goldilocks” frequencies in the mid-band that offers the best of both worlds in terms of a combination of high 5G speed and long range, thus providing an excellent 5G service over a wide area. To blanket cover larger swathes of the country with 5G, T-Mobile also uses low-band frequencies.

Meanwhile, AT&T and Verizon relied heavily on the low-band 600 MHz and 800 MHz frequencies for distance to cover as much of the country as possible with a 5G signal and the high-band millimeter wave (mmWave) frequencies to cover city-center areas. And so, they neglected the mid-band “sweet spot” frequencies.

In a sense, the combination of the low-band and mmWave band to cover the country was the worst of both worlds. While the low-band frequencies afford a longer range, they do not support speeds anywhere near true 5G. In fact, as highlighted in a previous Speedcheck report, the speeds they provide are often just marginally higher than that of LTE and sometimes even worse.

While the mmWave band provides exceptional 5G speeds, its much higher frequency means that it covers only very short distances and has difficulty penetrating walls. Consequently, the service provider has to provision many more cells to provide adequate coverage in densely populated city center areas, which takes longer to build.

This is why, on balance, T-Mobile’s 5G network is faster than that of AT&T or Verizon. Furthermore, even though mmWave is rolled out in densely populated city center areas, the range of T-Mobile’s 2.5 GHz can cover even more people because it encompasses many smaller cities and towns, or urban populations, over a much wider area.

Notwithstanding, AT&T and Verizon have big plans to catch up with T-Mobile. Both have invested heavily in the Federal Communications Commission’s (FCC) auction of the first tranche of C-band spectrum during December 2020 and January 2021.

C-band is also a “Goldilocks” mid-band frequency in the 3.7 GHz to 4.3 GHz spectrum, supporting a perfect balance between long range and high speed. AT&T spent $23.41 billion for its C-band licenses while Verizon spent a whopping $45.45 billion, demonstrating their strong commitment to building out a fast, ubiquitous 5G service in the future. But can they catch up with T-Mobile?

Table 1: Snapshot of current 5G coverage and future plans for the Big Three U.S. service providers. (Sources at the end)

Unfortunately, both AT&T and Verizon subsequently hit another hurdle. While AT&T planned to roll out C-band 5G coverage to 75 million Americans by the end of 2022 and Verizon 100 million by the same date, the FCC raised concerns that a high-powered C-band frequency could interfere with the altimeters on aircraft, thus creating a potential safety hazard. They have therefore asked the two service providers to come up with a solution to this issue.

According to The Hill, the leading proposed solution is to reduce the power of the C-band signal, especially around helipads and airports, during the first six months of 2022. This will afford the FCC and aviation authorities time to carry out more tests. The FCC and Federal Aviation Authority are currently reviewing this proposal.

While AT&T and Verizon are accommodating on the issue, some industry commentators also point out that no other country where C-band 5G has been successfully deployed long before the U.S. has encountered the same problem.

Typically, reducing power also reduces speed, although AT&T is adamant that the speed reduction will be minimal. What is of more concern for both operators is whether this technical hitch will have a longer term impact on their rollout of a fast ubiquitous 5G service, leaving T-Mobile free to "sprint” ahead (pun intended) even further and faster using their 2.5 GHz frequency on which they still have spare capacity. The 2.5 GHz spectrum does not have the same interference concerns with aviation equipment as the C-band.

It therefore appears that T-Mobile is not simply going through a purple patch in the level of 5G service they offer and the customer satisfaction they enjoy, but their fortuitous business decisions will likely keep them ahead of the game for some years to come.

This is a salutary lesson for all service providers. AT&T and Verizon led the 4G speed revolution race for many years, and both AT&T and Verizon claim to have been the first to have launched a 5G service in the U.S. But T-Mobile’s merger with Sprint and its gaining of that prized 2.5 GHz frequency block was a game-changer for them.

5G customers are more satisfied with their service than 3G/4G customers because of a combination of the better experience, connection reliability and speed that they enjoy. The margin is currently just 10%, but this will undoubtedly grow as 5G rollout continues.

As for T-Mobile’s rise to the top, its merger with Sprint will perhaps go down in history as one of the most significant boosters to the U.S. 5G level of service on record. Their acquisition of the much-coveted 2.5 GHz spectrum was both fortuitous and empowering, enabling them to comfortably move ahead of the competition by a margin of at least two years. This has allowed T-Mobile to cover more of the population with higher 5G speeds than AT&T and Verizon, which is reflected in their superior 5G customer satisfaction.

The remaining question is whether AT&T and Verizon can catch up and how long it will take for them to do so. Besides the hurdle of the potential C-band interference with aircraft altimeters, let’s also hope that having spent a combined $69 billion on the new C-band spectrum between them, it doesn’t leave them strapped for cash to build out more of their high-speed 5G network capacity.