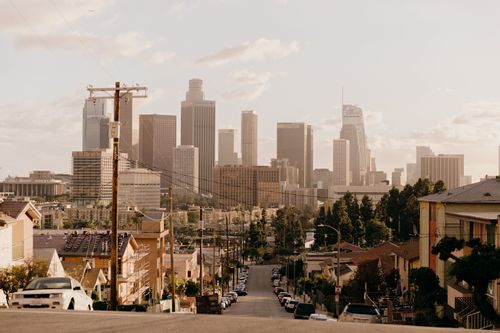 It is a premium and excellent internet provider and telecommunication across the states. The company’s fastest gigabit plan is known as Internet 1000, claiming to provide 1000Mbp/s. However, you cannot expect the download speed to go above 940Mbp/s while the uploading rate remains 880Mbp/s.

Frontier is also a good internet-providing company, but with access in limited areas, making the worse choice for areas not listed on their website. They offer internet speeds up to 940Mbps, and monthly plans begin from $49.99.

Interesting Fact: “99% of people residing in Los Angeles have an internet connection of 25Mbps.”

Their internet services deliver plentiful speed for live streaming, using social media, watching series, and dealing with heavy-sized files on cloud servers. In addition to this, they are charging around $49.99/month.

Spectrum is an again viable choice in looking for internet providers. You will find people using their ultra-internet plan in most Los Angeles districts; the said internet-connection plan hardly goes up to 400Mbp/s.

They are still relying on those ordinary cables with great grief, not the fiber optics, mainly limiting even their highest internet plan to the speed uploading rate of 20-35 Mbp/s.

Most of us use the internet for downloading purposes. Content creators and businesspersons use the web to upload their content on YouTube and have zoom video call meetings.

Cox is the third-fastest internet provider if we rank conferring to overall internet speed. Unfortunately, their premium internet plans are only limited to people of Palos Verdes and San Pedro. But they do offer significantly cheap internet packages in Los Angeles for their users.

Earthlink is a high-grade and internet-providing company working in Los Angeles. Our team of experts performed professional research on this aspect, and they claimed this company on the top of other competitors.

According to our speed test results, the internet connection of Earthlink delivers internet speed up to 1000Mbp/s within the price bracket of $49.95 each month, which is quite sensible for such lightning-fast internet speed.

If you want to opt for pocket-friendly quality services with self-satisfaction, you must check the internet services from Spectrum Los Angeles. They are offering valuable customer service and support.

But, if you are looking for something faster like lightning, then nothing can compete with AT&T Fiber Los Angeles; they are offering monthly plans providing internet speeds reaching 1000Mbp/s, which is substantially higher downloading and uploading speeds with an almost identical monthly pricing plan compared to Spectrum.

However, the other competitors, such as Frontier Los Angeles, also provide budget-friendly internet services with no-contract plans for their customers. Along with, Starry Internet Los Angeles offers contractual internet services over wireless technology, with a remarkable overall internet speed of 200 Mbp/s with comparably lower prices and high customer satisfaction. You can never expect lightning-fast speed like fiber internet.

What would be the estimated cost for internet in Los Angeles?

Generally, the estimated cost for the wireless package in Los Angeles begins from $35 and can go high as $100/month, certainly depends on the type of internet connection, internet speed, and more particularly, your internet provider company.

However, AT&T is providing the cheapest wireless internet plan starts from as low as $35 every month, with internet speed limited to a download rate of 100 Mbps.

Which company is providing the best cable internet in Los Angeles?

When it comes to best, no other can have contention with Spectrum Los Angeles. They are also offering limited and unlimited internet service; both cases are reliable and fast enough to beat competitors. You can eradicate the overthinking about metered (allotted limit) by considering Spectrum Los Angeles.

Is there any free internet hotspot in Los Angeles?

Yes, there are several public internet hotspots, mostly in the public library and nearby areas. But, as most of them are closed due to global pandemic. Therefore, you cannot enjoy a free internet connection anymore in Los Angeles.

How should I measure the actual internet speed in Los Angeles?

Speedcheck can help in checking the actual internet speed coming from both your cable or wireless connection. All you need, open the webpage and click speed check. That’s it!

What basic difference would I feel if switching from Spectrum to AT&T, and vice versa?