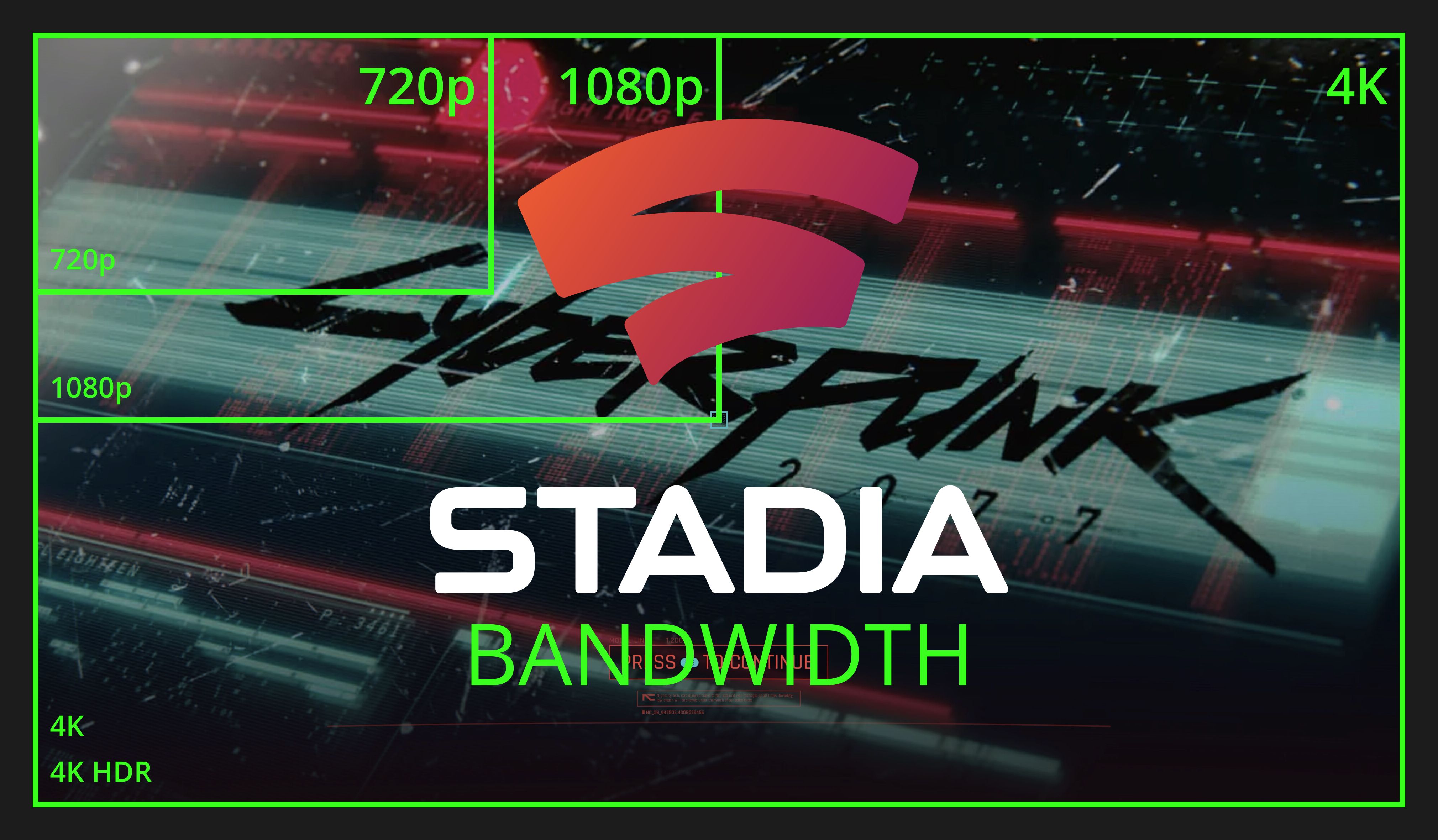 We measured Cyberpunk 2077's actual bandwidth usage on Google Stadia. We chose different scenarios based on the graphical intensity and analyzed the bandwidth requirements for these scenes for various Stadia settings: 720p, 108p, 4K, 4K HDR.

To enjoy playing Cyberpunk 2077 (if you can be so lucky, who can these days) make sure you have the right internet connection. You can find our recommendations in the conclusion.

Taking a look under the hood of Cyberpunk 2077 on Stadia

With the Cyberpunk release dictating the headlines for the last weeks, from good, to bad, to ugly, we thought how can we pile on ;-). No just kidding. With so many people having a terrible experience playing the game, we asked ourselves can we generate some insights that can help people actually choose the right setup for them. So I took our networking equipment that I use in my day job to test my internet speed and repurposed it to measure the bandwidth of Google Stadia.

We ran our tests on a 1 Gbps cable internet connection. We got a Chromecast Ultra that we connected to a 4K TV and hooked up the Chromecast via Ethernet to our networking stack. We recorded the bandwidth usage in 2 second intervals.

In this section, we will discuss the outcomes and significance of the raw data that we collected while playing Cyberpunk 2077.

We looked at different scenarios that should be emblematic for the bandwidth usage throughout the game. There are, essentially, three important aspects that gameplay revolves around:

And while we were at it, we also looked at how long the game takes to start as well as how much bandwidth Stadia actually needs if we do nothing.

Below we've put together visuals for these three scenarios:

Here are the results for the various video resolutions available on Stadia:

As a baseline for our test, we measured the bandwidth over time for the various resolutions as our character stood in the corner without moving.

4K: The bandwidth usage for 4K gameplay also remained relatively stable, except for a very brief trough after 16 seconds which saw a minimum of 1.54 Mbps. The majority of the values recorded were around 2.2 to 2.3 Mbps, with a maximum of 2.34 Mbps and an average of 2.21 Mbps.

4K HDR: We observed the same stable trend as we had for the 4K gameplay. The maximum value, however, stood at 3.28 Mbps, while we calculated the average to be 3.04 Mbps.

The bandwidth usage for general inactivity by standing in a corner shows that the base value for being in the game varies between 0.4 Mbps and 3 Mbps.

Again we recorded more 30-second sessions for each of the resolutions available as our character started the first interactive scene in the garage. Here, V (our character) walked and jumped around before interacting with the NPC (non-player character) and the vehicle. This also gives us an idea of what the data usage would look like throughout quests and interactive scenes.

4K: We started with a low of 5.25 Mbps, which rapidly increased to 30 Mbps after four seconds as we jumped around the vehicle. There was a maximum of 33.10 Mbps around the time when V started interacting with the NPC. The bandwidth usage decreased as we hotwired the car, but increased again as we interacted with the NPC to select a response. Bandwidth, therefore, generally varied for these different activities as we calculated the average for the 30-second recording to be 22.39 Mbps.

4K HDR: Starting with a relatively low 18.49 Mbps, the 4K HDR session also saw larger variations in bandwidth usage. The session reached a peak of 42.16 Mbps, while an average of 30.84 Mbps was recorded.

Cyberpunk is known for being an open-world game, so it should come as no surprise that we took V out for a spin in the outdoors to give us a fitting scenario to max out the bandwidth needs. All the movement, reflections, and angle changes should put the largest strain on the bandwidth. For this section, we recorded the bandwidth usage as we drove around in a vehicle.

720p: At 720p, we noticed that our data usage started with a minimum of 0.83 Mbps as we drove out of the garage, and reached a maximum of 10.19 Mbps. We calculated the average to be 8.61 Mbps as the bandwidth usage was fairly consistent while distant scenery loaded on the map.

1080p: For our 1080p gameplay, similar to our 720p session, we started with a minimum value of 8.43 Mbps and ultimately observed a maximum of 20.45 Mbps. Here, bandwidth usage varied slightly, but not too significantly, as we calculated an average of 17.05 Mbps. Increases in bandwidth usage, at 4 seconds, 14 seconds, and 28 seconds, could be due to rapid acceleration and also having more complex parts of the map appear outdoors. We also saw a slight dip in bandwidth usage as our car briefly stopped and turned around.

4K: Our 4K session started with a below-average value that briefly spiked after two seconds but ultimately decreased thereafter. The bandwidth usage for the remainder of the session was relatively stable with a maximum of 36.34 Mbps and an overall average of 31.22 Mbps.

4K HDR: We saw a minimum of 27.74 Mbps as we started our 4K HDR gameplay. The bandwidth usage was generally stable, however, as we reached a maximum of 41.37 Mbps and calculated an average of 38.59 Mbps for the session. Bandwidth usage dropped again near the end of the 30-second session as we stopped by crashing our vehicle.

What happens if you have a slow internet connection?

Those with slower internet connections may be wondering whether it is still possible to play Cyberpunk 2077 on Stadia even if they don’t meet the minimum bandwidth requirements. While it’s possible to still enter the game and, technically, play it, you will probably experience an enormous amount of lag. In fact, we tested our 720p session by limiting our bandwidth to a mere 5 Mbps.

The result was very unflattering. Not only did we see a Stadia notification that our connection was unstable, but it was rather difficult to move around due to the delay/lag. Therefore, it is definitely not recommended to play the game with a slow internet connection, since you would not be able to immerse yourself in what should be smooth gameplay.

Before we give you our recommendations, please keep the following in mind. Our recommendations are based on bandwidth dedicated to the game. So, if you are the only person on your network, all good. If there are more people on your network, or you plan on dedicating bandwidth for other purposes such as downloading games on your PC, you will need to make sure to accommodate their data usage as well and take it into account when getting a package from your ISP.

For instance, if you need 11 Mbps for 720p, you better get at least 20Mbps if you share your connection with other people — more, even better.

From the results, it is clear that Google Stadia is a great option for users who just want to jump into the game and play immediately. A bandwidth of at least 11 Mbps is required for 720p, while a 22 Mbps connection is required for 1080p, 37 Mbps for 4K, and 42 Mbps for 4K HDR.

However, we recommend having at least 20 Mbps for 720p, 30 Mbps for 1080p, 45 Mbps for 4K, and 50 Mbps for 4K HDR. That way, other users/devices will still be able to connect to your internet connection without affecting your Stadia experience — that is, unless you plan on disconnecting all your devices and making sure nobody else uses your internet while you are playing.